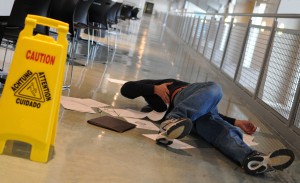 When a business welcomes the public onto its premises, it becomes legally responsible for keeping those people and its employees reasonably safe. Unfortunately, that’s easier said than done.

A whole 85% of workers’ compensation claims are related to employees slipping on slick floors, and every year more than 8 million emergency room visits are due to trips, slips, and falls. If you are injured in a slip and fall accident on a store’s premises, you may have a valid legal case against the business. To receive compensation, it is important that you hire an experienced personal injury attorney to evaluate and press your case.

Trips, slips, and falls occur for any number of reasons. Here are a few of the more notable legal cases related to this type of injury.

The Home Depot Personal Injury Case
At a Pennsylvania Home Depot in 2011, a woman sued after slipping on an unknown substance while shopping. Her fall landed her in the Emergency Room where she was examined for severe lower back pain. The victim’s personal injury attorney requested to see the surveillance tape from the day of the accident but discovered that the part of the tape that would have shown his client’s fall had been mysteriously deleted. As a result of this lack of evidence — and possibly the implications of the missing video recording — the court ordered Home Depot to pay the woman $44,383.61.

Walmart Personal Injury Case
At a Tennessee Walmart, a woman was entering the building when the automatic door suddenly closed on her and struck her in the face. The damages were severe and she had to get a rhinoplasty to repair her broken nose. However, Walmart claimed that the woman had caused the accident because she was not paying attention. Her personal injury attorney argued that the store did not properly maintain the doors. The court awarded the victim $35,000 but then reduced it by 10%, because they ultimately agreed that she was, to some extent, at fault for not paying attention.

The courts don’t always settle personal injury cases in favor of the plaintiff. For instance, if a customer were to spill a beverage in a grocery store and another customer immediately slipped in it, the store would not be held liable because there had not been sufficient time to clean up the mess. If more time had passed between the spill and the fall, however, the store may be held liable for negligence.

If you live in Kentucky and suffer a fall in a store or business, you can find a personal injury lawyer in Pikeville KY. Pikeville lawyers like Glenn Martin Hammond will work with you to make sure that you get the compensation you deserve.